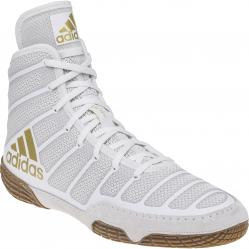 It is always a tough task as a company to discontinue your bestselling shoe, and then to make a sequel that can match the qualities of the original. Trust us, many brands have attempted, and many h Read More

It is always a tough task as a company to discontinue your bestselling shoe, and then to make a sequel that can match the qualities of the original. Trust us, many brands have attempted, and many have failed. However, Adidas absolutely blew the Varner out of the water with the new AdiZero Varner 2. The Varner 2 is the most up to date rendition of the original AdiZero Varner that was designed to the specifications of Olympic Gold Medalist Jake Varner. Jake burst onto the international scene after winning the 2012 London Olympic gold in dominating fashion. After stunning the wrestling world with his international experience, he surprised them once again with his first signature shoe design. The first Varner was extremely impressive with its split sole, ultra-breathable, and sleek, minimalistic design. It quickly became the poster child of the new Adidas wrestling shoe lines. While the newly updated AdiZero Varner 2 may not resemble its predecessor too much in physical appearance, it has improved upon every single aspect that was holding the original back from true greatness.

When creating the Varner, Adidas made sure to cater to the aggressive and “in your face” wrestling style that Jake possesses to dominate his opponents. To have this style the original minimalist flat pads just weren’t cutting it. Adidas had to completely redo the original Varner from the sole up. No longer sporting separate split soles, the Varner 2 has a new hybrid sole that features two pads going along the bottom and sides with a connecting traction strip in the middle of the foot; all made from a new and updated rubber material for extraordinary grip. The new soles are in a league of their own compared to the original, and a necessary update to be able to powerfully ankle pick your opponents, just like Jake does.

After updating the soles, Adidas moved up its body and added reinforced stitching almost everywhere imaginable, and then some. That means no more bursting heels and toe rips (the plagues of the original Varner) will be found anywhere on the Varner 2! Adidas even went more precautionary with the Varner’s durability by adding a very innovative and attractive vinyl and synthetic overlay. This ensures its longevity and also provides added depth and support to the shoe that adds to its elite level appearance. The new upper provides a great sock-like and broken-in feel right out of the box. To top off the Varner 2 is an updated lacing pocket that was actually nonexistent on the original. The pocket allows you to be able to tuck your laces away and not give up that one-point penalty in matches or trip up in practice.

Lastly, the first Varner featured a pointed toe that made the rest of the shoe extremely too narrow for comfort. While we would not consider the Varner 2 an exceptionally wide shoe, Adidas rounded out the toe box, and added extra heel height, to keep you on your toes in comfort. The Varner is truly one of the best all around elite level shoes available that can keep up with Jake himself. If it can keep up with the fast paced and aggressive style of an Olympic caliber athlete, then it can handle any situation imaginable.